A perfect symphony of genres!

A huge thank you to Shalini and author Steve Moretti for having me in this tour, and giving me the chance to read these books. This is the review for the second part of the series, but we were sent part 1 too, for which I am thankful. The full blogger list for this tour is later in the post, so do go show them some love! 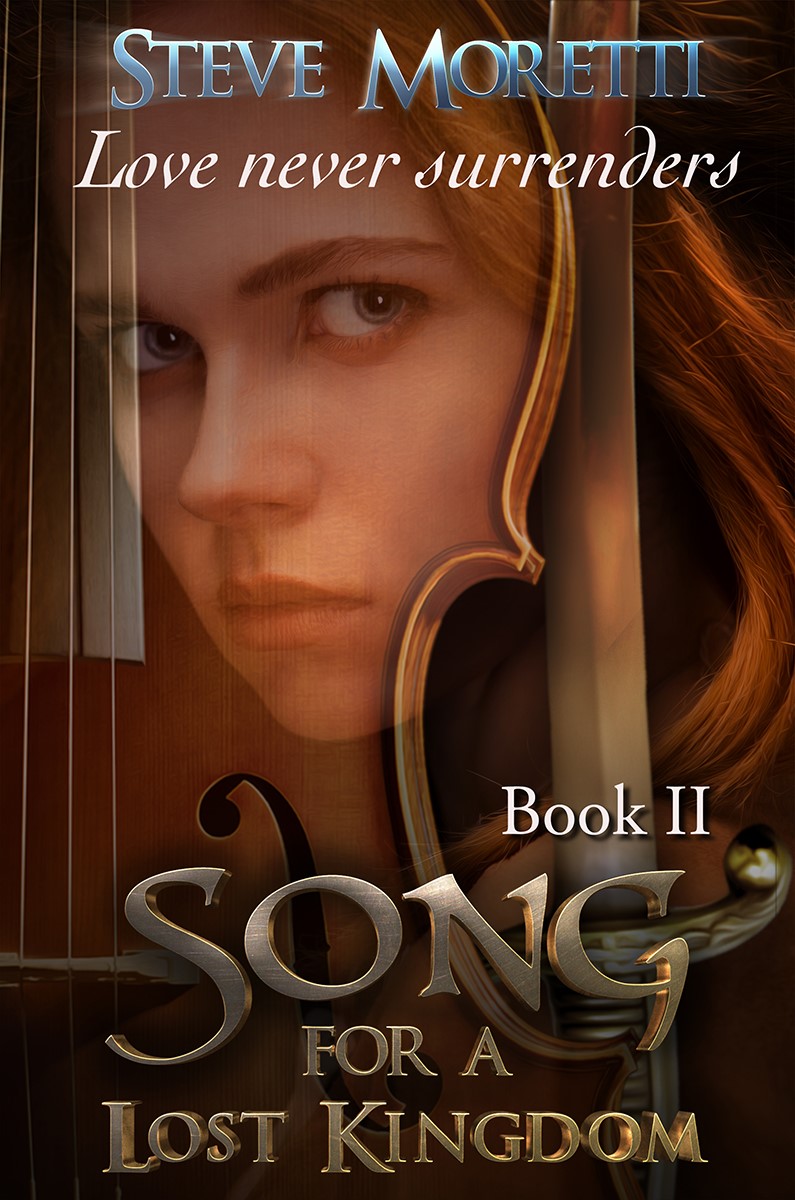 Music is not bound by time. And Adeena Stuart is not bound by anything that will stop her from saving the man she’s fallen in love with, even though he’s been dead for almost three hundred years.
In Book II of the Song for a Lost Kingdom trilogy, her music provides the portal to James Drummond who is fighting alongside Prince Charles Edward Stuart in the 1746 Jacobite uprising. Though their cause is doomed, and James is destined to die shortly after the Battle of Culloden, Adeena’s determination never wavers.
Left behind in the present, Adeena’s friends and families are equally determined to return her to 2019 before the expanding growth in her head becomes fatal and they lose her forever.
Throughout it all, the music sweeps across those in both the past and present in this novel of history, fantasy, romance and science fiction.

Did the blurb confuse you but also intrigue you at the same time?
Yeah, me too when I read it.
Like, how can a book have FOUR elements together, in one cohesive storyline? I never even thought that was possible.
So, superb storyline + gripping writing = A.M.A.Z.I.N.G book.

Song For a Lost Kingdom took me on a such a wave of symphony– I never wanted it to end. The only thing it fell short of, was giving me a live orchestra recital.
With every page that I turned, the story got further from reality, further from the world as we know it, and yet, somehow, it all made perfect sense.
Hell, it made me root for Lady Katherine! And Adeena Stuart. That would have been two people, except they’re not, because they’re the same person!

Adeena Stuart transcends time to become Lady Katherine Carnegie of the yore. But how?
By playing her special Song for a Lost Kingdom, on her special Duncan cello.

“When you are complete, I will aid you to dress for dinner. Lady Anne has seated you with the Duke of Perth,” the servant announced through the door.
“Thank you, I’ll be don.. uh complete, in a few minutes. That work?”

There was a pause. Adeena realized that sometimes her vocabulary confused those around her.
“I will return presently,” she servant responded.
Presently? Adeena smiled.
She closed her eyes again. The Duke of Perth, James Drummond – the man who perhaps loved Katharine and perhaps, her. But he seemed to be keeping his distance. He was unlike any man she had ever known in her own time. How much was him and who he was as a person? Or was it just the culture and time they were in – 1745 Scotland?

When Adeena discovers her special connection with this cello and song, she is willing put everything on the line for it. Even acting in ways that could have her arrested, jeopardise her life-long relationships, even take her life, literally everything. I didn’t necessarily like her character a lot during the start, but she grew on me as the story progressed.
The other characters, her parents, best friend Tara, love of her life, are all very well detailed.

Song For a Lost Kingdom also has a major chunk of history, which is to be expected considering Adeena is travelling 200 years into the past.
I had thought it was all fiction, but the descriptions and characters were so vividly described, I had this burning desire to check if it happened for real as soon as I finished the book. And imagine my surprise when it all turned out to be true! How I wish history lessons in school were taught this way, I’d never miss a class!
Steve must have had to do a mind boggling amount of research to get the facts right. Kudos to him for that.

The history described is all Scottish history, which inevitably translates into a lot of Scottish accent. And I absolutely loved that!

“Aye. Don’t know how he knows for sure, but he tells me there’s a story behin’ it. But nae a particularly nice story,” Murdo said, looking at the bottle.
“Mah uncle’s something of a Culloden nut. He’s got a whole collection about it.”

One more fact I love- the book highlights facts we know, but never really dwell upon. Like how, in a historical book, an entire battle can be summed up in a paragraph. The one paragraph that doesn’t count the dead people, or the preparation that went behind the battle, or the feelings of the soldiers and their loved ones. I felt that this was what the book was really about- how bad can two people love each other, for one of them to be reborn 200 years later, and come back into the past to complete the story as it was meant to be.
How history glorifies the mighty, and obliterates the regular.

I am an author in Ottawa, Canada. I have a varied background in business, journalism and education.
I love history, and the people who have lived fascinating and sometimes very ordinary lives in extra-ordinary times. I’m drawn to music and the arts, as well as scientific discovery, politics and science fiction, especially time-travel. My novels combine my interests in stories that put characters within a realistic world that just happens to include elements that challenge our perceptions of reality. I am currently completing my first trilogy, Song for a Lost Kingdom, and will be starting a new
series in 2020.

What could have been:

The Title:- This is the name of the special song that enables Adeena to travel into the past.

Adeena had become the woman in her grandmother’s dreams.
Katharine, not Ashlynne. Determined, not afraid.
She would change history.
Or die trying.

Genre :- Fantasy
Final Thoughts :- This book made me realise the true meaning of the phrase- ‘THE BEST OF BOTH WORLDS’, quite literally, because that is what happens in it!
Up Next :- ‘A Cruel Deception’ by Kim Booth

This site uses Akismet to reduce spam. Learn how your comment data is processed.

Hey there my bibliophages ! Meet the author of book reviews, Alaknanda (or just Alak, whatever you prefer!). A regular girl in her 20's with a day job as a software engineer, who loves crafting and exercising. And most importantly, I have been a passionate reader since childhood. They just take you to another world don’t they? Annnd, even if you don’t read the blog post, please do read the book. Now, if you’ve reached here, and probably wondering what I’ve called you’ll in the opening sentence, bibliophages – people who love to read books, pronounced as ‘bib’ li’ oh’ fa’ jes’’ Signing off, see you’ll in the posts.